Dutch, but with an open mind to the world

The Film Kitchen is a Dutch film production company of price winning international feature films, shorts, television films and series, and documentaries. We closely co-operate with strong and experienced filmmakers as well as with outstanding young talents. Key for all our productions are the relevance for today’s society and the aim to match the highest cinematographic standards. 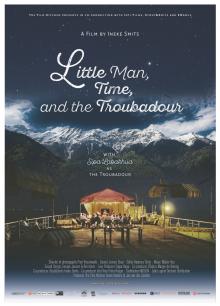 The new documentary film ‘Little Man, Time, and the Troubadour’ by Dutch director Ineke Smits has been selected for the Dok Leipzig festival in Germany and will have its world premiere there on November 1st. The film has also been selected for the Minsk International Film Festival ‘Listapad’ and will have its premiere at CineDOC in Tiblisi, Georgia. The documentary film raises the question what creates a national identity by small human stories about Abkhazia, a tiny country that declared independance from Georgia in 1993, and has only been recognized by Russia. Ineke Smits took Abkhazia as an example for a universal theme.

Producers of the film are Ineke Kanters and Jan van der Zanden. Coproducers are Peter Krüger (Inti Films) and Stout&Smits.

Financial support for The Zandvoort Formula

NPO Fund granted € 200,000 for the realization of the documentary film The Zandvoort Formula about the fever that has struck the Zandvoort community after the local circuit was put on the calendar for the 2020 Grand Prix. Director Wytzia Soetenhorst is examining the impact on local businessmen, politicians, environmentalists and other residents; they all have an opinion about what this race circus will bring the village at the sea. Soetenhorst already started filming with cameraman Ton Peters and sound engineer Benny Jansen.

Ineke Kanters and Jan van der Zanden are the producer of the documentary film to be released in 2020.

After winning several awards at European festival a jury consisting of young viewers from all over Europe has chosen Fight Girl as this years' best film. The Young Audience Award of the European Film Academy is the most important price the film by director Johan Timmers and script writer Barbara Jurgens has received so far. Fight Girl gathered far more points than the two other competitors.

Abkhazian artist Sipa Labakhua travels around his small, unknown native land, provoking audiences with his autobiographical one-man marionette show. Thus he collects the personal stories of Abkazian nationalists, Russian hippies, Syrian repatriates and Orthodox believers. A road movie that sheds new light on a highly topical question in a world that is on fire: What is a country?

Bo (12) is a kickboxing talent and wants to be the new Dutch champion. The divorce of her parents disturbs her plans. As Bo moves with her mother and brother to a suburb she discovers new things in herself and in life.

Claire (13) is vacationing with her sister Zoe (15) and mother Sophie (40) at a resort hotel in southern Spain. Sophie spends her days by the pool and shows a minimum of interest in her daughters. In the beginning Claire clings to her older sister Zoe, who mercifully lets her tag along. But when Zoe meets a boy her own age, Claire is left alone. By the beach Claire befriends Amram, a young Senegalese beach vendor. As their relationship deepens, Claire tries to help him, but unintentionally ends up making his desolate situation even worse.

More
See all films that have been completed

Disgraced engineer Erik and small-time crook Lenny come across old wine bottles in a resistance hero’s hidden cellar near Hitler’s 1940 Ardennes headquarters. They convince an antiquarian that the wine was actually the Führer’s. The swindle gets wildly out of hand...

Zandvoort transformed from a fishermen's village into a seaside resort and home of the Dutch grand prix. In the late 20th century it became a village in decay. But now a radical transition is looming: the Formula 1 mega circus will return to the village. Zandvoort will become world famous! How are the citizens of the village preparing for this event that vanishes everything. Is there still room for a critical view or is euphoria the only touchstone?

My Father is a Saucisse (co-production)

Zoë (12) is her dads best friend. When, on a whim, he decides to give up his job as a banker to become a professional actor, her parents get into a big fight. Zoë is the only one who believes in her father and tries to help him in any way she can.

More
See all films in production

In a remote hotel Mr. K finds himself in a bizarre nightmare when he cannot find the exit and realizes the place is shrinking. Increasingly on edge with the eccentric inhabitants, Mr K must find his purpose and uncover the secret within the walls before the building collapses.

Jacob (46) travels across the United States with his daughter Sophie (15). They have fun, but the trip is disturbed by the repeaterd sudden disappearances of Sophie. In the desert of Nevada Sophie says goodbye to her father. This is a turning point for Jacob. As he returns to his wife the entire trip seems to be Jacob’s way to deal with a trauma.

Fourteen-year-old drug dealer Johnny is in a home for young people with a difficult home situation during the week. When he learns that due to circumstances he is not allowed to go home at the weekend, he asks one of his customers, the famous actor Antony, if he wants to be his weekend guardian. This brings them both into unknown territory.

More
See all films in development Jan van der Zanden graduated in cultural psychology and worked as a psychologist at the University of Amsterdam. After the foundation of Waterland Film in 1994, he followed international film financing at the Media Business School. In 2003 he was selected 'Producer on the Move' at the Cannes Film Festival. In January 2016 he founded with Ineke Kanters The Film Kitchen. Ineke Kanters studied history in Rotterdam. After her college years she worked as a producer for Studio Sport (Dutch public television) and as an Internet editor at the Netherlands Broadcasting Foundation in Hilversum. After this she worked as a fund manager at the Rotterdam Media Fund and as development executive producer at Kasander Film. Since January 2012 she had her own company and worked part time at Waterland Film where she was involved in the development, financing and production of feature films. In January 2016 she founded The Film Kitchen together with Jan van der Zanden.

In the last two years Ineke Kanters was selected to be a member of the jury at international film festivals in Istanbul and Ostend (Belgium). She's also a jury member at the Dutch CineKid Festival and at the Dutch Film Festival in Utrecht (Film Producers Netherlands Award).